In good news, the overall rate of positive tests declined in the US. Data from John Hopkins showed that the rate of those testing positive to COVID tests hit a new low. The number of new cases of COVID is related to both the prevalence of the disease and the availability of testing. So the lower positivity rate is a good sign. As more states relax social distancing measures, monitoring this statistic may be key for determining how states are actually doing. 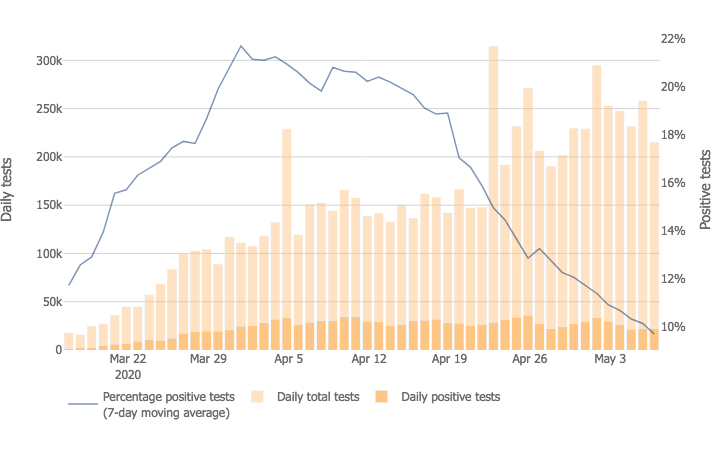 Despite the above good figures, expert consensus is still negative on the pandemic.  A 538 survey of infectious disease experts estimated that the number of US COVID deaths would be around 250,000 with a 90% chance that the death total would be between 118,750 and 1,211,500, by the end of the year.

Unemployment claims increased another 3.2 million, with more than 33 million people applying for unemployment benefits in the past week. This would imply an unemployment rate of around 20% or the equivalent of the state of Texas becoming unemployed.

The Brookings Institute released their estimates of the cost of COVID. They estimated that aggregate COVID spending would equal 5.6% of baseline health care spending, with an estimated range of 3.5% to 9.6%.

The US government officially allowed the emergency use of Remdesivir for COVID patients. The first batch of the drug was given to the Federal government for disbursement. Beyond that there has been no announcement on pricing. The Institute for Clinical and Economic Review estimated a price between $10 per treatment and $4,460 per treatment, depending on the pricing model used and the ultimate effectiveness of the drug.