Today, President Biden released several executive orders as a way of signaling the new direction the Administration would take on the ACA and Medicaid. Executive orders are orders to create regulations and policies; in other words, on their own, they do not have the force of law. Furthermore, implementing the vision could take months, if not years, so it’s best to think of them as coming attractions. Nonetheless, you can read the Executive Order here, which includes a list of policy priorities that be found here

Here are a few highlights:

Reports circulated that Democrats in Congress could begin work on a reconciliation bill as early as next week. 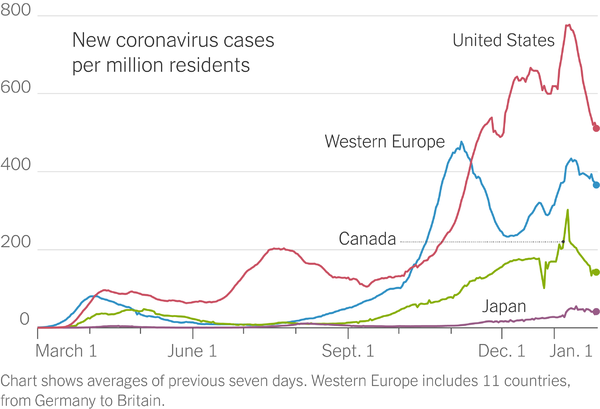 COVID cases have declined 35% over the past three weeks. Hospitalizations have also declined substantially. While deaths remain high (for example, over 4,000 people died in the US due to COVID yesterday), deaths are also expected to decline in the coming days and weeks (COVID deaths typically lag case numbers by 3-4 weeks).

The declines have been attributed to a combination of improved mask-wearing/social distance adherence, and some levels of herd immunity being reached (an estimated 100 million Americans have had COVID so far, and about 24 million people have received a vaccine shot) may be reducing the spread.

While the news is good for now, there are increasing worries that the new, more contagious variants, could result in large increases in the not too distant future. For example, Paul Rumer’s modeling suggests that the combination of the new COVID variants coupled with lockdown fatigue could result in more than 300,000 additional deaths in the coming months.

The Bureau of Economic Analysis (BEA) released the latest US GDP figures today. Overall, the BEA found that the US economy shrank by 3.5% last year, the worst year for the US economy since demobilization following World War II in 1946.  While the expectation is that the economy will grow in 2021 and US interventions reduced income losses, the economy continues to have problems, as over 18 million Americans are currently receiving unemployment benefits.

Research you can Use

HCCI conducted analysis of the difference between the Medicare Physician fee schedule and the payments received by physicians. They generally found that FFS payments were lower than PFS rates.