On January 20, 2021, Joseph R. Biden assumed the office of the Presidency. In terms of health policy, most of the initial focus of the new Administration has been on COVID. Many of the initial executive actions have been focused on the COVID pandemic.

As part of a series of Executive Orders, the Biden Administration paused regulations that were recently enacted by the Trump Administration but were not yet effective. This action does not nullify them, but it does give the new Administration time to release its own regulations before the old regulations go into effect.  One potential regulation that has been hinted at by the initial executive orders is coverage of COVID testing by insurers.

Currently, there is no timeline for a hearing for the nominated HHS Secretary (Beccera). Other key Health policy officials within HHS/CMS (i.e., CMS Administrator) have not yet been named.

The Biden Administration did announce that they’d make a number of key Health policy announcements on January 28. The Hill reported that Executive Orders could be announced to “strengthen Medicaid and initiate an open enrollment period under the ACA. 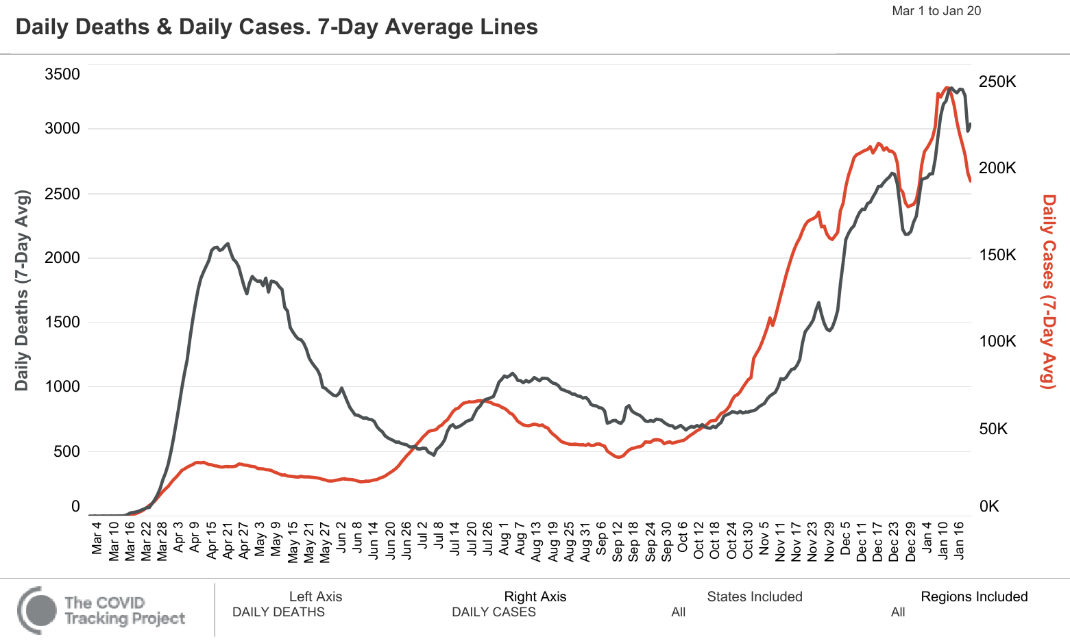 While unfortunate historic numbers were reached this week (over 400,000 dead and an all-time one day death toll of 4,400), the seven-day average (which smooth out one day anomalies) has improved for cases, deaths, and hospitalizations.

While the immediate term looks improved, there’s increasing concern about new COVID variants. It has become increasingly apparent that mutations of the COVID virus have appeared in a number of different locations. While there is still analysis being done, some of the variants (especially B.1.1.7 variant that first emerged in the U.K.) is likely more contagious and could increase the number of cases in the U.S. starting in late February/March. It also strengthens some arguments that in the future, much like flu vaccines, individuals will need to get updated vaccines.