The Commonwealth Fund updated its analysis of outpatient data and deferred care this year. As can be seen in the chart below, both Medicare and Commercial have plateaued about 10% below baseline while Medicaid visits have lagged further behind.  The authors also saw some modest reduction in the past month in visits in AZ, TX, FL, but not much elsewhere. 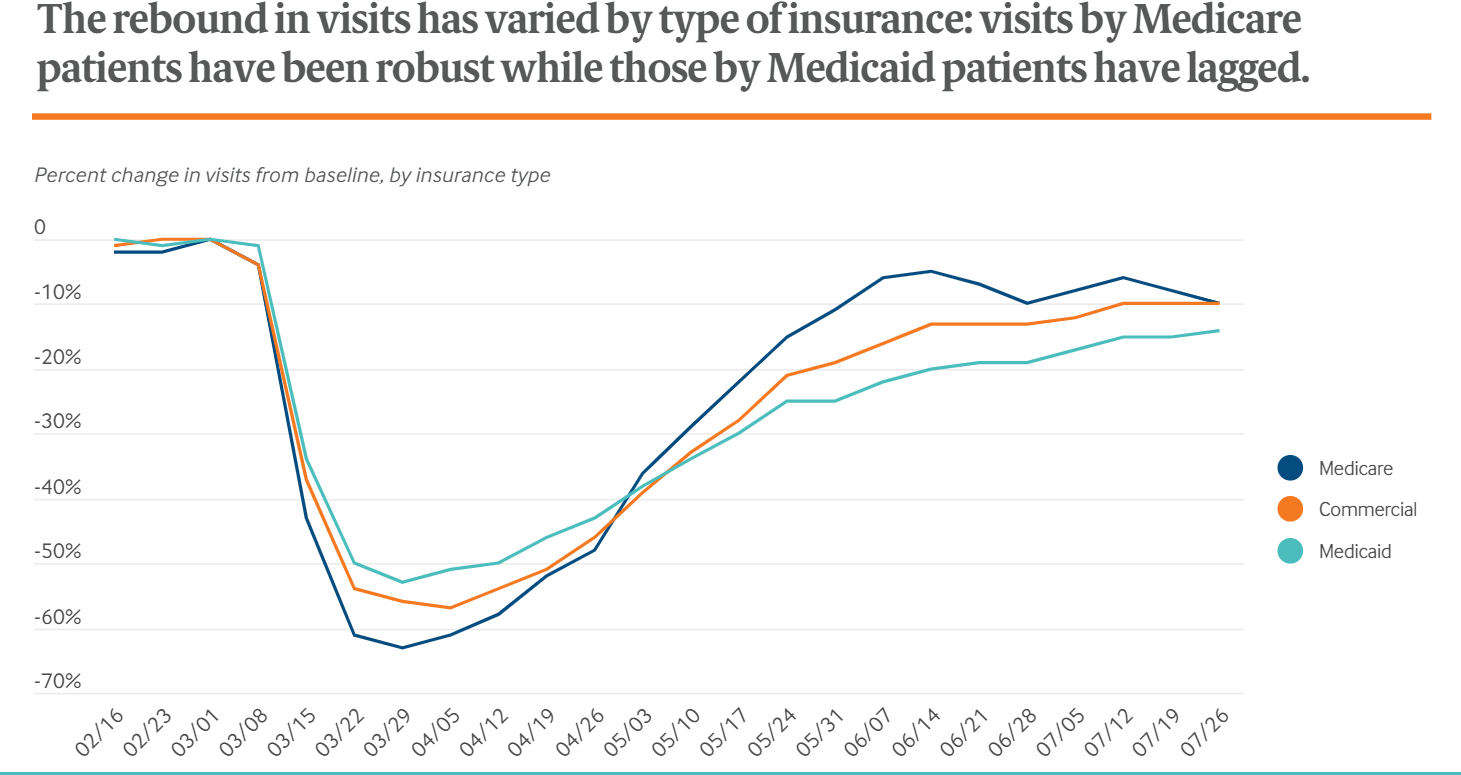 A mixed week in COVID news. While the number of new cases declined (see below), so did testing numbers. Weather disruptions and general administration backlog have resulted in fewer cases being reported, which makes it hard to make declarative statements on the trajectory on the pandemic. 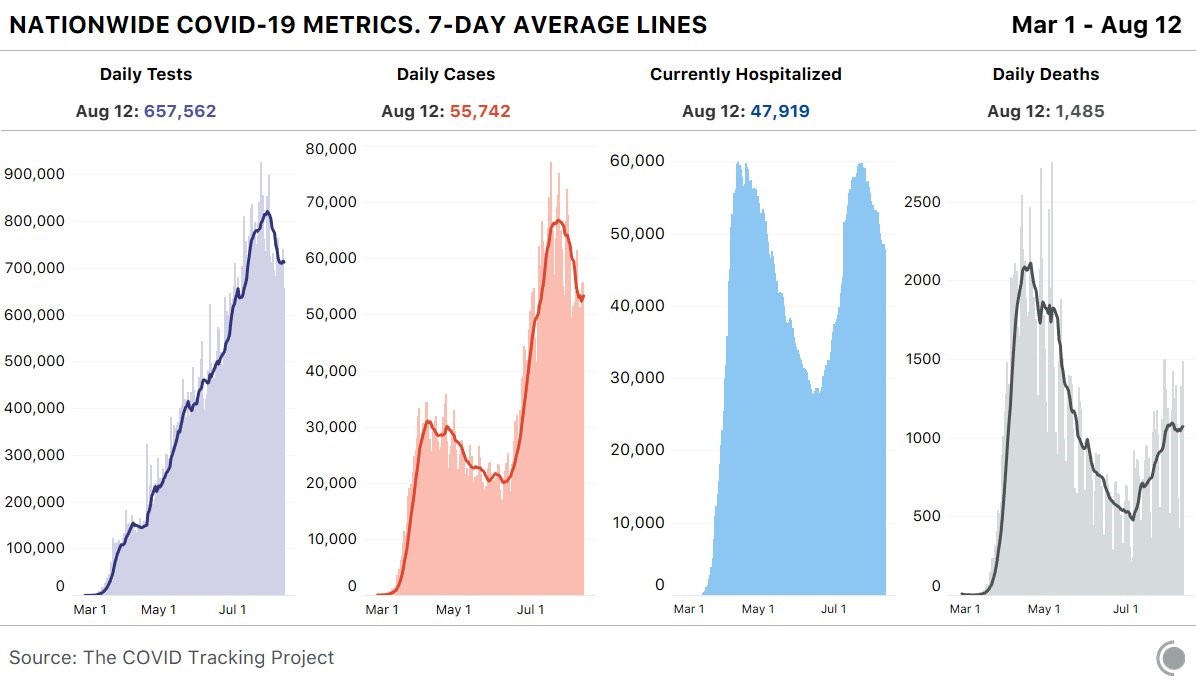 Unfortunately, this week several researchers released studies of all-cause deaths. The NYTimes analyzed the number of all-cause deaths (data from the CDC). Overall they found that 200,000 more people died than usual this year. It’s unclear if this number is because of COVID undercounting or lack of medical treatment of other diseases or some combination. The 200,00 deaths  isabout 60,000 higher than the parallel number of COVID deaths.

Nick Bunker released a useful chart on job loss. This week continued to see improvements in the number of individuals filing for initial unemployment insurance, although numbers are still well above historical levels. 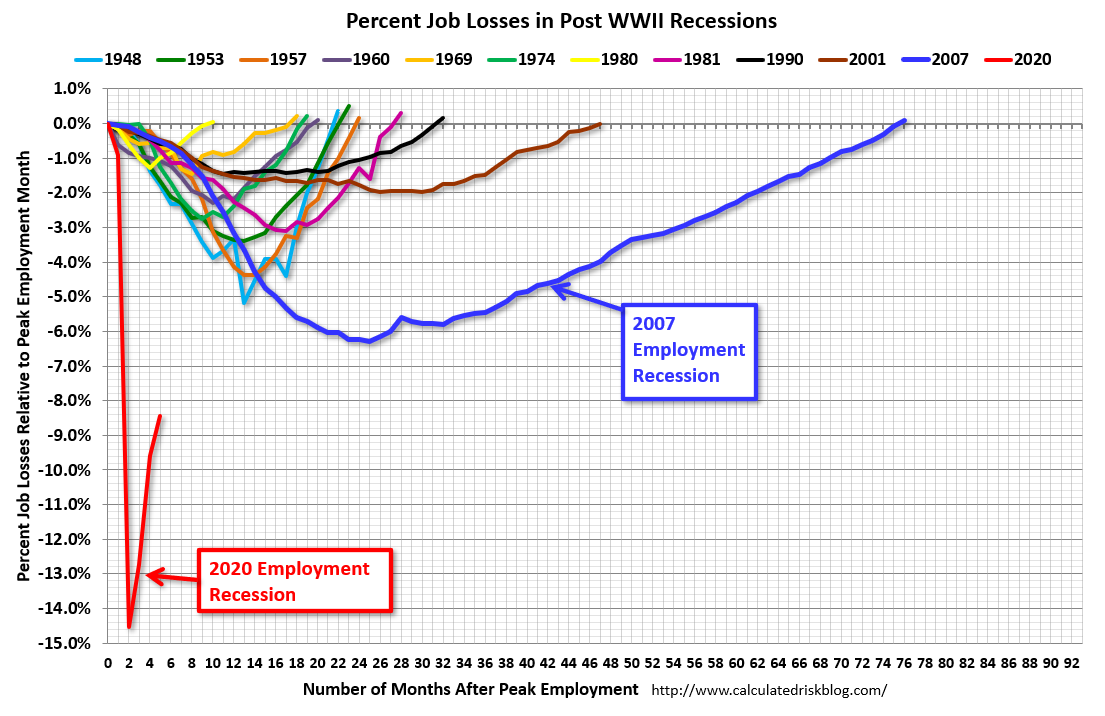 President Trump announced a series of executive orders designed to provide stimulus for the country. The actions create a new program in which unemployed individuals would get $300 of federal funds provided states provide $100. To date, no state has agreed to the program. The other policy would allow businesses to delay paying payroll taxes. This could have implications for the Medicare Trust Fund as a decline in payroll taxes would reduce funding for the Medicare Trust Fund.

Congressional actions on COVID stimulus remain stuck with several leaders raising the possibility of no action at least until mid-September.

Finally, with the announcement of Kamala Harris as the Vice-Presidential nominee for the Democratic Party, the 2020 election kicked into high gear. Vox has a good summary of key dates this fall. Next week is the Democratic Convention, followed by the Republican Convention the week after. Health policy topics are expected to be discussed at both conventions.