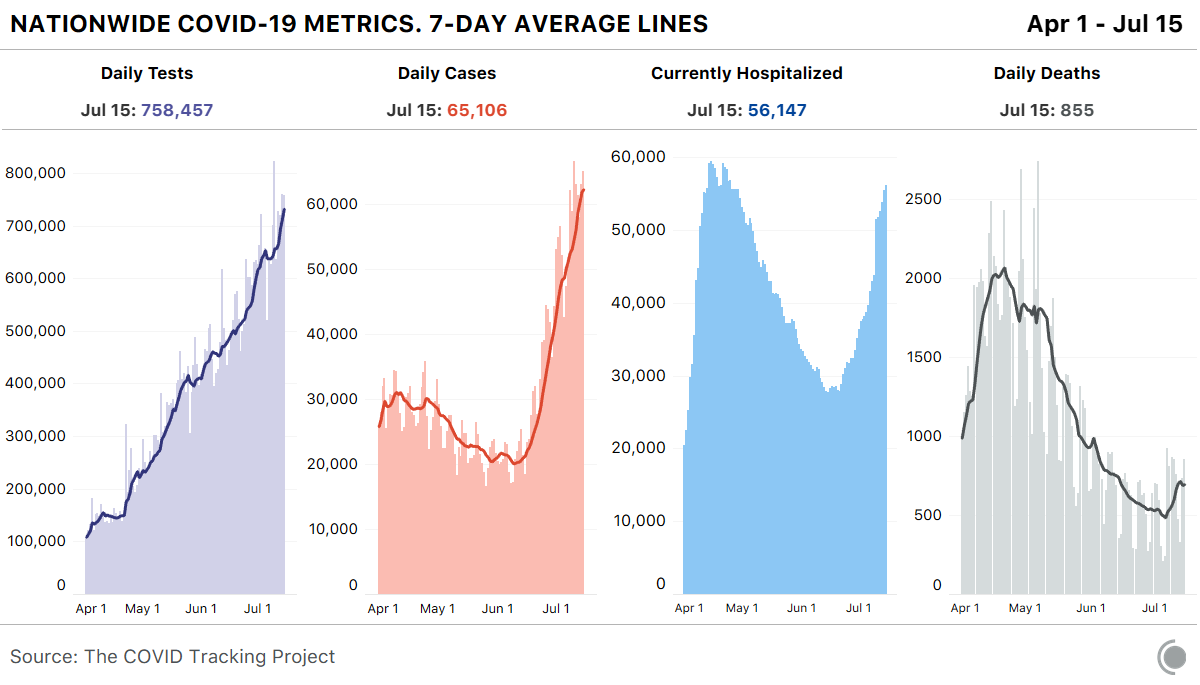 Overall in the US, cases and tests hit a record high, hospitalizations were near-a record high (note hospitalization data now includes Florida), and death counts had an uptick as well. In hard-hit areas like Miami or Houston, ICU capacity was reaching maximum levels.

One of the more difficult aspects of the pandemic is the difficulty of determining trends in how the disease is spreading. Partially this is because of the long lags between infection, diagnosis, hospitalization, and deaths. In other words, changes in individuals’ behavior (more mask-wearing) or state behavior (i.e., restrictions) might not impact the number of deaths for 4-6 weeks. Complicating this is the length of time it takes for tests to provide results. In recent weeks, especially in hard-hit states, test results are not being returned for a week or longer. Consequently, when changes in case counts (for example, the recent decrease in daily cases in Arizona) are being observed, it’s not entirely clear if this is because of a legitimate decrease in the number of infections or because test results are taking longer to be processed.

Moderna published promising Phase I results this week and will begin recruiting volunteers to take part in Phase III trials that will begin at the end of the month.  There are currently 23 vaccine candidates in various stages of human trials.  Several scientists are holding out for the potential of a vaccine approved by the end of the year.

Urban Institute updated its estimates of the impact of the economic downturn on health coverage. The new estimates found that 7.3 million fewer people have employer coverage, 4.3 million more people have Medicaid, 2.9 million more are uninsured, and there are about 200,000 more individuals in the non-group market.

Congress: Next week, the Senate Majority Leader is expected to release the Senate Republican plan for COVID/the economy. Congress will have about two weeks to come to an agreement before their next scheduled recess. It is unlikely that Congress will be able to come to an agreement before the additional unemployment insurance expires, which may result in a greater economic slowdown.